Skip to content
BUY 1 GET 1 HALF PRICE - USE CODE: CMBOGO

Original article by Stuart Gordon, Sports Therapist, All About Balance (UK) with contributions from the team at Barefoot Science

One in ten people suffer from plantar fasciitis, a painful condition and a frustrating one for patients and therapists alike! In the UK alone, that statistic means plantar fasciitis could affect approx. 6 million people - particularly those who spend a lot of time on their feet.

Individuals who spend a large portion of time standing or walking as part of their work (waitstaff, chefs, nurses, construction workers, retail works, etc.) or even their hobby and leisure activities are particularly susceptible to plantar fasciitis.

Athletes of all ages and those with a very active lifestyle are no stranger to the pain of plantar fasciitis. We know that 100,000’s of runners, golfers and men, women and children worldwide are affected. Furthermore, significant numbers of serving and veteran soldiers suffer from foot related conditions and numerous lower limb injuries as well. In fact, one top US military podiatrist has shared with Barefoot that 60% of the cases he sees are plantar fasciitis!

So, what is Plantar Fasciitis?

Put simply, plantar fasciitis is a condition that causes pain, discomfort & inflammation on the sole of the foot, usually near the heel.

The general medical consensus is that plantar fasciitis is caused by; 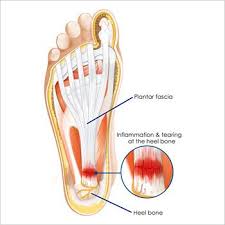 How do you treat Plantar Fasciitis?

There are many different suggested treatments for plantar fasciitis backed by numerous studies - all of which present varying and often, inconsistent results in healing or alleviating plantar fascia pain. Success is mixed and recurrences of plantar fasciitis can be frequent, leaving therapists and patients equally frustrated. Which begs the question ‘what are we missing’?

I was one of those frustrated therapists, having treated people from all walks of life for over 29 years. I love helping my patients recover from painful or debilitating conditions that prevent them doing the things they enjoy, but finding an actual solution to this tricky condition eluded me for many years. In fact, it’s fair to say that treating plantar fasciitis was a frustrating pain in the ar…area on the bottom of the foot!

That is at least until I discovered Barefoot Science insoles about 6 years ago.

I have since found Barefoot Science to be incredibly effective at eliminating pain and getting people back on their feet quickly and safely. Not just by treating the symptoms but by stimulating, strengthening and retraining the feet which means:

If you are reading this you’ve probably had a run in with plantar fasciitis, or perhaps you're currently suffering and wondering if there's anything you can do? The most well-intentioned professional advice, online research studies, folk-lore, late night Google diving, blind faith and sheer frustration have probably led you to try some or all the following methods:

You’ve probably been told to stretch your plantar fascia;

However, given that one of the suggested causes of plantar fasciitis is over-stretching, is more stretching really a logical approach?

Strengthen the muscles of the feet

A number of recent studies suggest that strengthening the intrinsic muscles (20 muscles in the sole of each foot that support the arch and create ‘toe off’) will help. For example;

Wearing Barefoot insoles is like having your own ‘in-shoe’ personal trainer constantly reminding you to do foot exercises to build up & strengthen your intrinsic muscles. With every Barefoot step you'll activate your proprioceptive nerves to improve balance… A 97.6% success rate says they work! Nearly 3 million people worldwide say they work!

In summary the study suggests;

Rolling on a ball

Rolling has become a feature of pretty much every gym in the world, and as a Sports Therapist for 29 years I’ve recommended such methods on many occasions. However, I always stress the need to roll slowly, with clear intention and only 3-4 times on the affected area. In other words focus on keeping the pressure constant and bearable…be kind to yourself!

These methods have been known to offer benefit for some people, but equally not for others.

Change your shoes for more supportive ones

Now, here is a massive area of debate. There are many different types of shoe, and a plethora of sports shoes that offer;

But the question is; should we be prescribing a shoe type based on an individual’s need for support’?  A study by Dr Joseph Knapik et al   on thousands of military personnel concluded:

“Despite the common thinking that we should support based on foot arch height, there was in fact no difference in injury rate when a ‘supportive’ shoe was worn“

That study throws a wrench in the ‘support and cushioning’ solution offered by traditional orthotics and medical practitioners.

As does another study by Freddy Sichting, Nicholas B. Holowka, Oliver B. Hansen & Daniel E. Lieberman, featured in the Guardian newspaper. This particular study explored the effect of shoes with an upward curvature of the sole (at the front) which holds the toes in a constantly dorsiflexed (bent upward) position.

The study suggested that “habitually wearing shoes with toe springs could inhibit or de-condition the force generating capacity of intrinsic foot muscles. While the direct consequences of weak foot muscles are not fully known, it is likely that they could increase susceptibility to flat foot and associated problems such as plantar fasciitis“.

I’m not by any means the first person to point out that in 50 years of ‘advanced technology’ in shoe design the percentage of runners getting injured has continued to increase year over year, currently standing at nearly 80%.

It seems pretty clear that something is being missed! But that’s a subject for another blog.

But, what about Orthotics?

As many of you will know, Orthotics been around for many years and have helped and will continue to help certain conditions.

If you are experiencing pain associated with plantar fasciitis it is often suggested that Orthotic insoles will help by supporting the medial foot arch and stopping the foot from over-pronating. It’s also true to say that a high arch (over supinated foot) could cause plantar fasciitis, so how does your treatment in that instance differ and will orthotics help with that? In either instance do Orthotics retrain the feet to function better or simply prop them up?

My personal opinion based on 1000’s of assessments looking at the whole bio-mechanical chain rather than just the foot, is that orthotics don’t provide any consistent or lasting benefit to Plantar fasciitis, whereas I’ve found that because Barefoot Science insoles work to retrain the intrinsic muscles of the feet and reorganise neuromuscular patterns of engagement through the body, they create better movement and successfully reduce the risk of plantar fasciitis recurring.

Current clinical guidelines include the use of foot orthotic devices for heel pain and plantar fasciitis, but lack any reference to strengthening of the foot. Temporary support may be needed during the acute phase of an injury but it should be replaced as soon as possible with a strengthening programme just like with any other part of the body.

In fact many people I’ve treated arrive with a carrier bag full of orthotics that haven’t helped or are simply uncomfortable.

Other Treatment methods for Plantar Fasciitis

If you’ve visited a Physiotherapist or Podiatrist with plantar fasciitis they will almost certainly recommend you try some of the techniques above. Additionally, they may use treatment protocols including;

Here again the success of such treatments is variable and recurrence is not uncommon so what is being missed?

Barefoot Science insoles are specially constructed insoles with a patented dome shape in front of the heel in an area of the foot called the mid-arch. On the underside of the dome there is a socket in to which you insert 6 or 7 progressively large plugs which provide a gradually increasing amount of nerve stimulation to ‘switch on’ your proprioceptive system and to retrain and strengthen the intrinsic muscles of the feet with every step. Barefoot Science insoles will improve your balance and help control pronation and encourage re-supination of your feet which means your feet and legs can function as nature intended. Giving you; 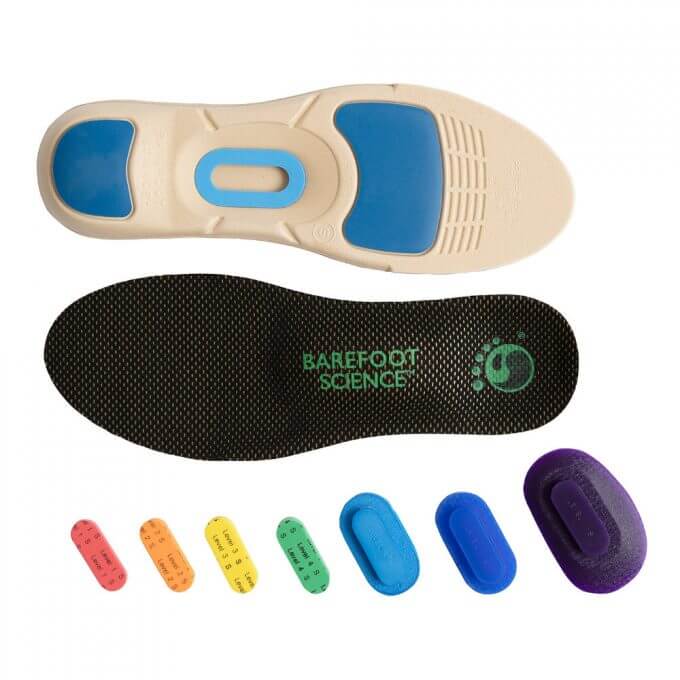 What is Proprioception and why is it so important?

Any article about plantar fasciitis or in fact pretty much any injury wouldn’t be complete without an explanation of Proprioception…the Body’s Built-In Injury Avoidance System.

There are 200,000 proprioceptors (nerve endings) in the sole of each foot. On every step they transmit information about movement, balance and spatial awareness, nourishing the brain with sensory information that;

Barefoot Science insoles were developed by a Chiropractor some 22 years ago specifically to stimulate proprioception from the feet up, and in 2019 became an approved product by the British Chiropractic Association.

Don’t take my word for this, read the comments of one of the US military’s leading foot specialists. He says it far better than me;

Mr Olden stated that 60% of the cases he has treated during his 30 year career are Plantar fasciitis.

His report continues as follows;

“I’ve been using Barefoot Science insoles on my patients for the past 7 years with a 97.6% success rate on plantar fasciitis“.

“I have constructed and tried many orthotics but found most of them were more accommodating to ‘functional foot conditions’ keeping the foot aligned and rigid, yet never strengthening the foot, although there is a myriad of devices that claim they do so. In my experience none of them worked for the purpose of strengthening the intrinsic muscles. I started working with Barefoot Science a few years ago, and it has really turned our practice into a healing clinic”.

He goes on to say; “Strengthening the arch and feet and their respective intrinsic muscles effectively allows the patients feet to become self-supportive over time and eliminates revisits for the same issues”.
“We’ve moved away from bracing the feet with orthotics which tended to provide short term benefits but caused additional weakness and instability, to progressively strengthening the feet with every step my patients take“.

As Mr Olden said “the proof is in the pudding, try it for yourself!

Get the inside scoop!